Soooo....  Where do I begin?  Lets start with TempleCon 14' which was 4 days long this year.  After deciding to bring my Skorne this year I've spent two months painting up as much as I could, and I ended up getting Xerxis tier 4 at 75 points and Dominar Fatty McBiggles Tier 4 at 75 points. 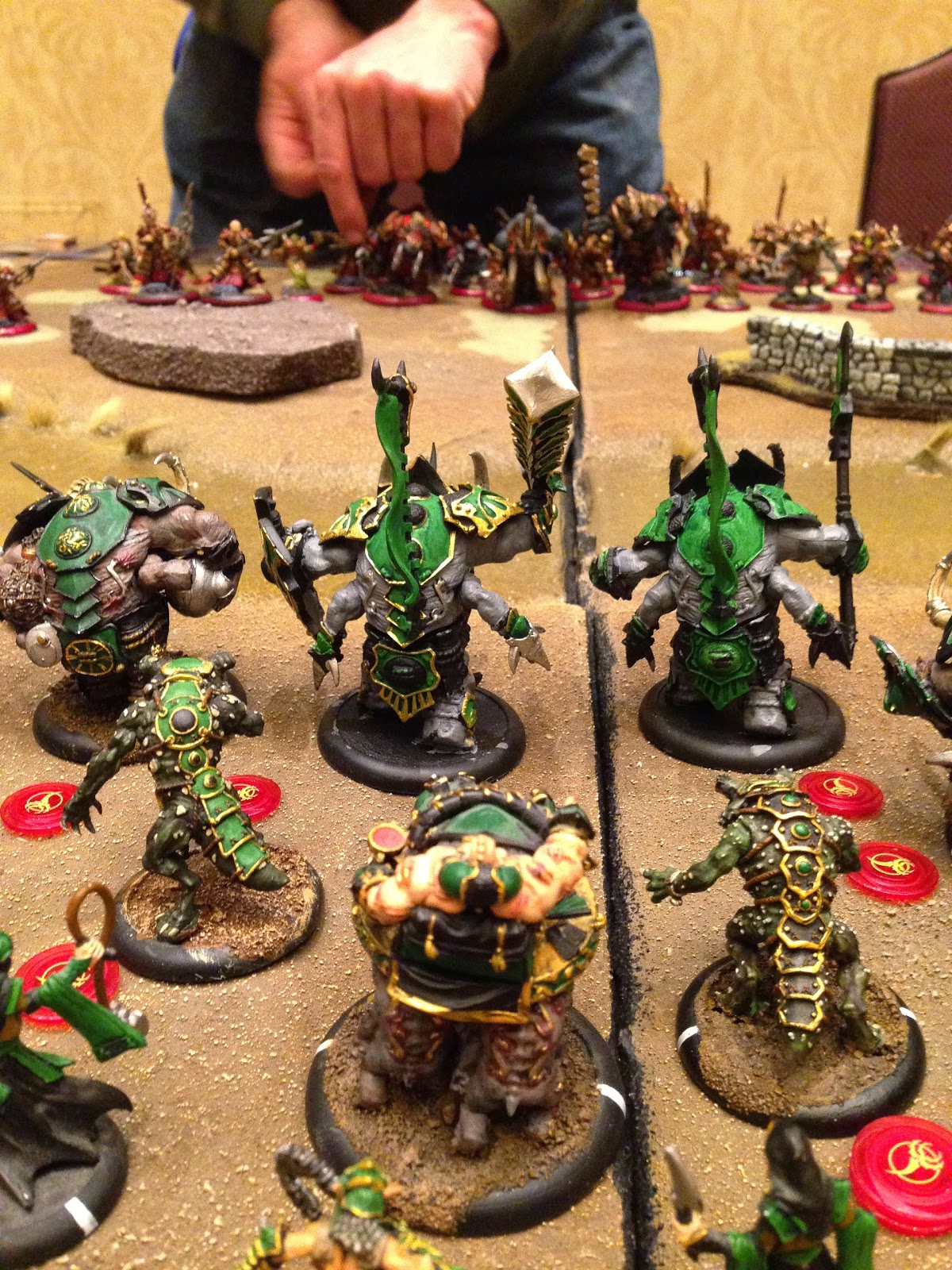 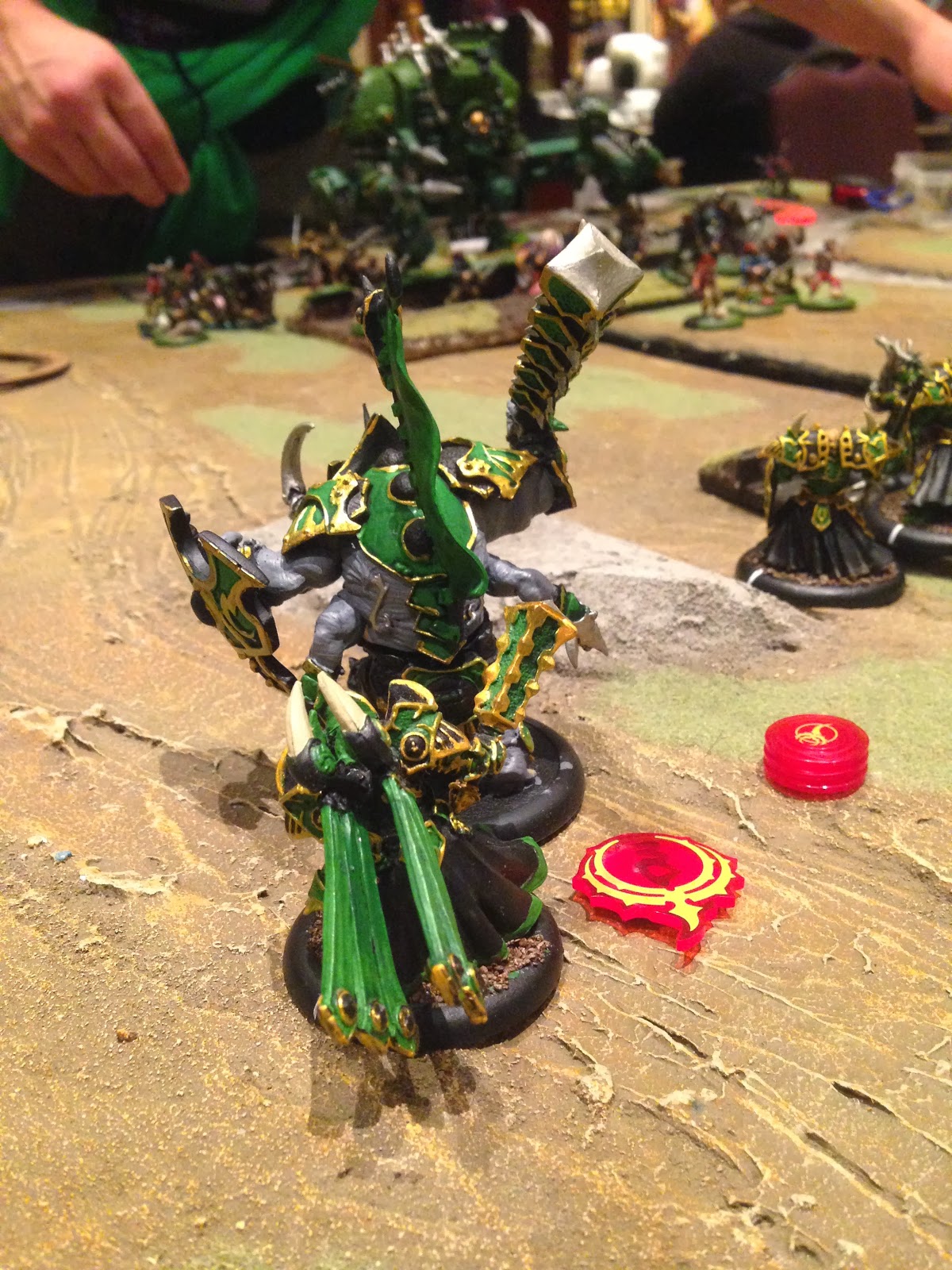 This was my first year as a PG volunteer and I was a bit nervous going in but showing up for my first shift the other PG's were really helpful and I ended up meeting a lot of the gang and having a really great time! So all in all I went 15-7, 8-0 with Fatty, 6-3 with Xerxis, and 1-4 with Caine.  Lots of great games only two bad opponents.  I must say to any one who plays Iron Arena and isn't out for a good time needs to rethink their involvement in miniature gaming. 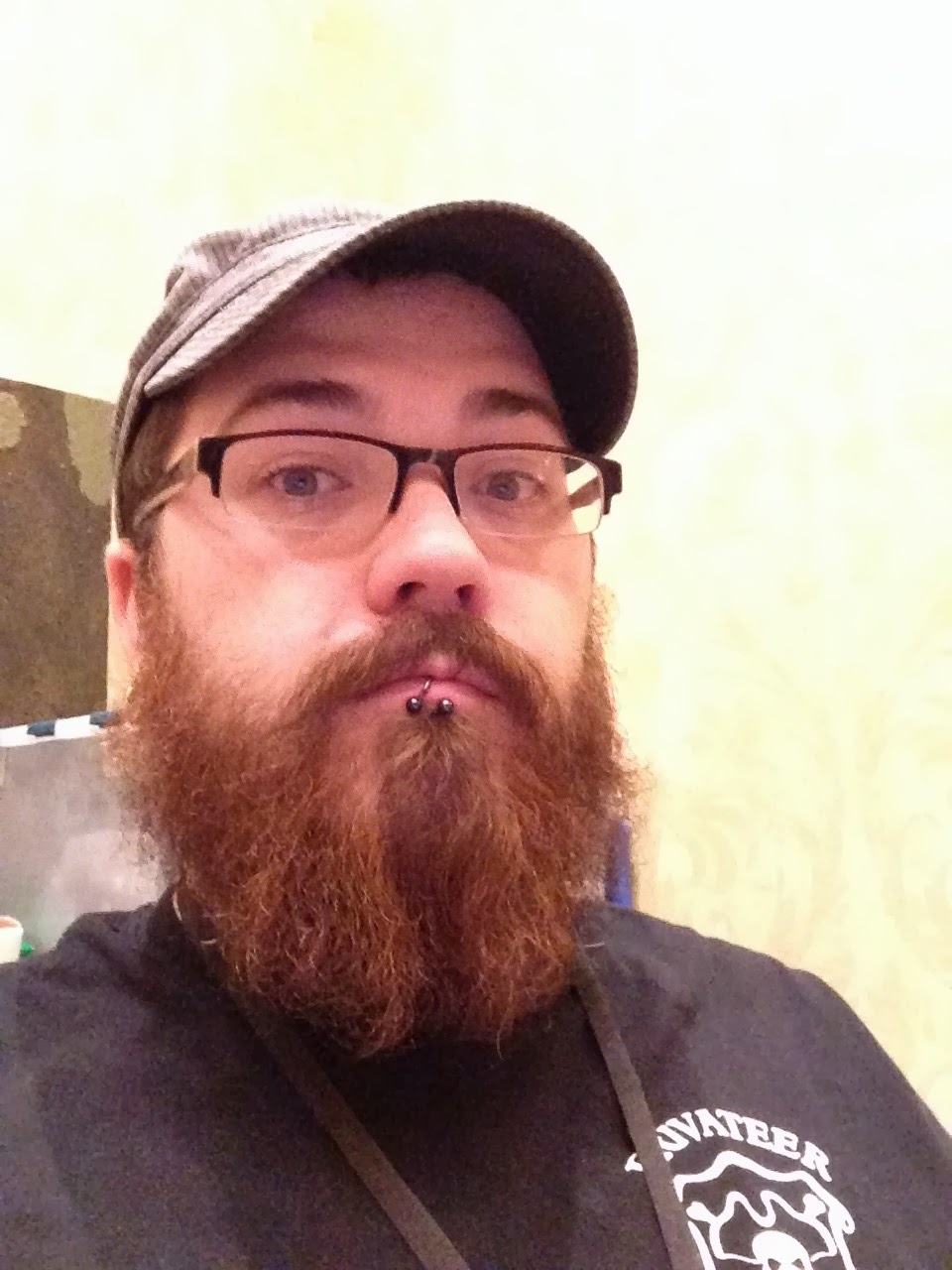 But all in all I had tons of great opponents, some I have faced in years past and some I have never faced. After a ton of games with Skorne I pulled out my pCaine T4 list for the last day of the Con and in it's first game faced off against a Kaelyssa T4 by Lost Hemisphere's Chris Miller, for the uninformed that list has "some" stealth in it... and if a unit is behind an obstruction like lets say a building they can shoot with reckless abandon... Needless to say we were promptly slaughtered as I could not come up with a response.  But for fielding pCaine T4 I did receive a Kicky Monk and an Advance Deployment Feet token. 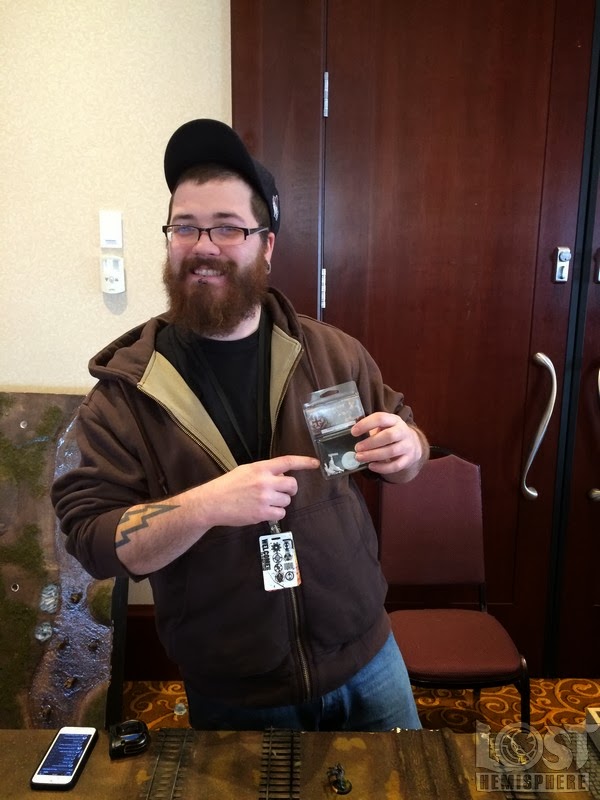 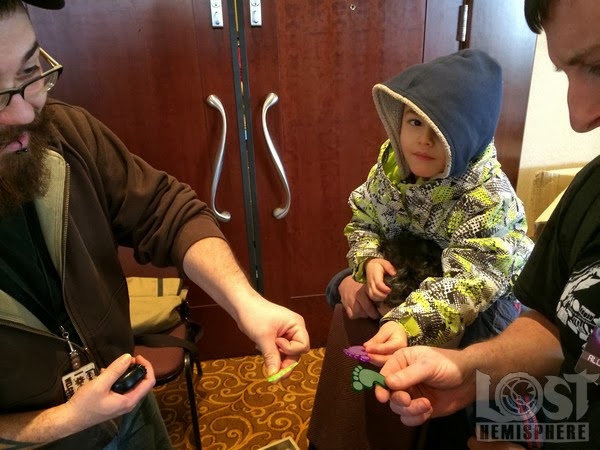 After 4 days and 10 hours of sleep lots of junk food eaten by the time I got home I was worn out... Definitely not as easy to recover as when I was 20.  Of course it didn't help that upon coming back to work, getting swamped with overtime and mandatory overtime.  Also getting prepared for our first 50 pt Steamroller of which we had a large interest.

So this leads me into our Steamroller, which we had 24 people who had shown interest in coming.  So I rushed out and got 4 new tables bringing out table space up to 24.  Day of the tournament came and we had 19 show up giving us a little bit of room.  Although it did get a bit loud! :D A big shout out to the guys from the Augusta group for bringing timers down to make turn timing go much smoother!  I have put in an order for 24 of these timer so that we can have our own without making them go out of their way just for us. 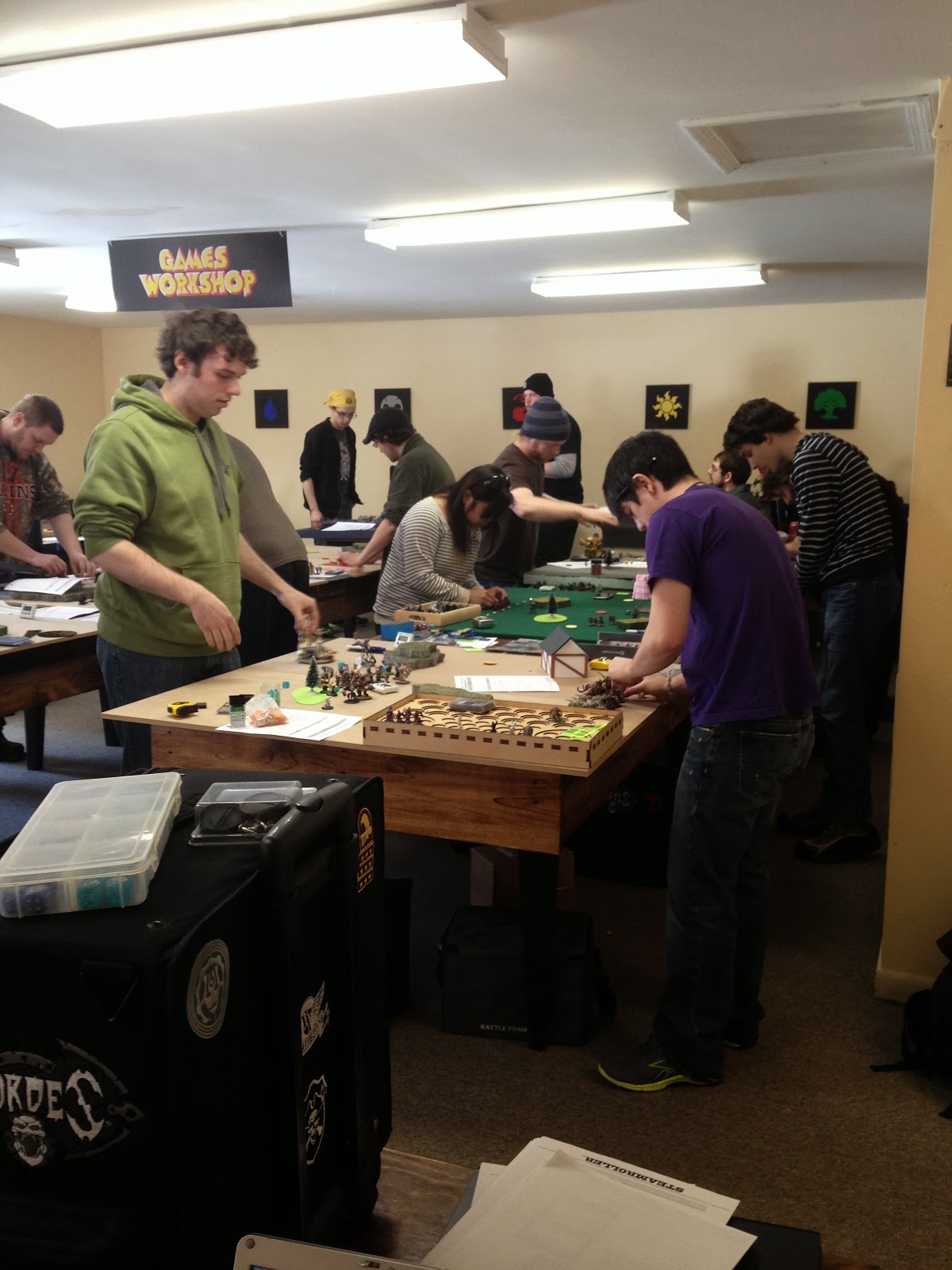 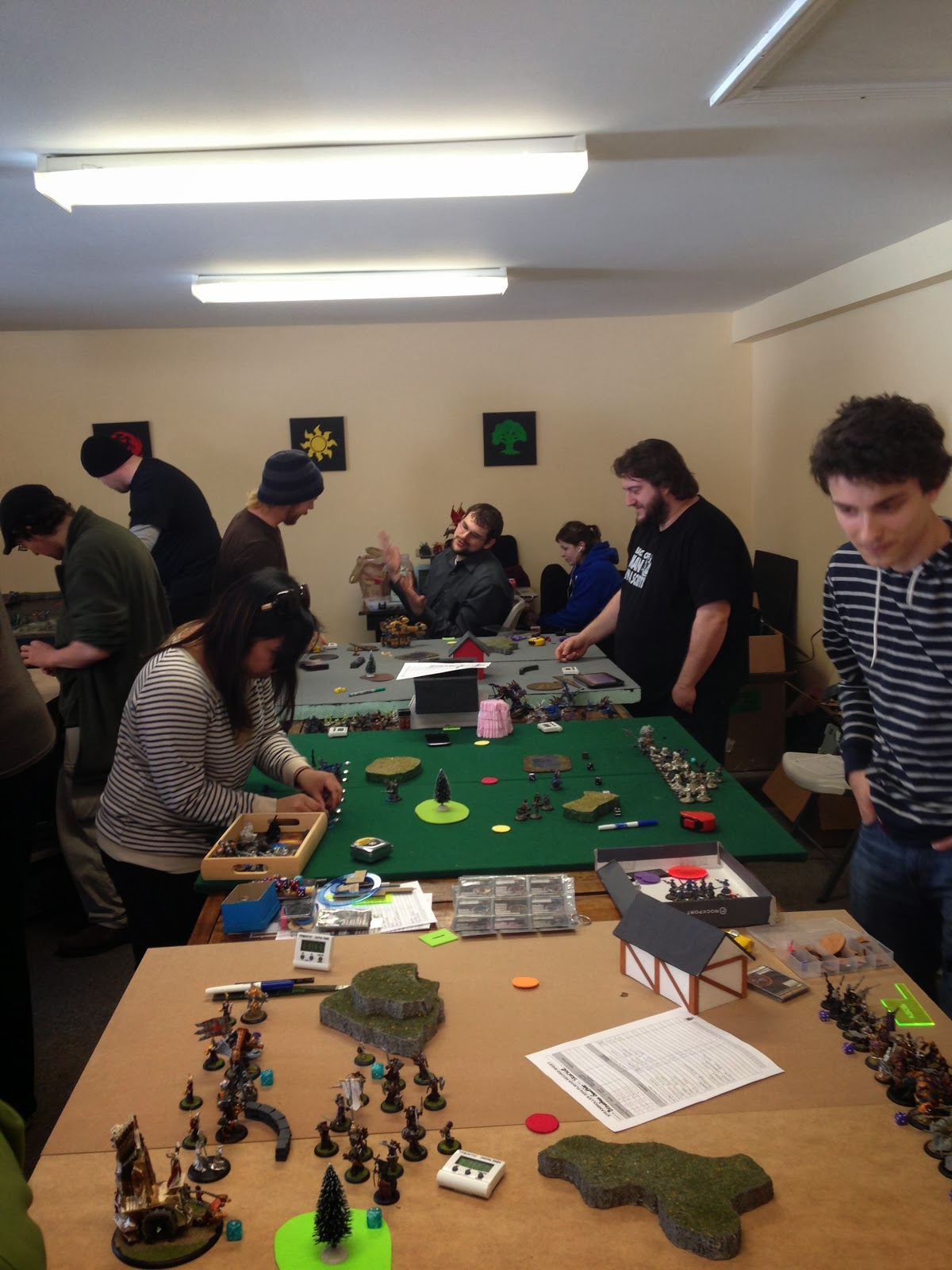 After 4 rounds we had 2 players a 4-0 and with the prize being so large I didn't want to go down to strength of schedule so we had a 5th round much to everyone's chagrin.  The mighty Trevor looking for a game as most everyone had gone home, I obliged with a hastily thrown together Xerxis T4.  With eMadrak facing off against eCaine, Trevor and I got our game going I first of all underestimated the stormlancers as well as a misunderstanding of eStryker's feet, being tired is no excuse, still I had a good chance until I placed Xerxis is a location I thought safe, thinking eStryker would need to take a freestrike from Tibbers w/fury.... Unfortunately I placed myself too close to Tibbers, and Stryker promptly dispatched Xerxis..... :) oops good on ya Trevor. Ben Cort's eCaine took top honors with Mike Morkve's eMadrak second.  Honorable mention to Ben Neal and his Witch Coven for taking third with strength of schedule.

With Vengeance on our doorstep we are starting a Achievement based league I will have a binder up at the Complex starting this Saturday!  It will run 14 weeks and will give all of you a good chance at the booty.  I have a surprise for the winner as well as long as I get get 10 people to sign up. Those who sign up can get achievements for just about everything possible.  The list has almost 300 achievements, of which I may add more silly ones in weeks to come. 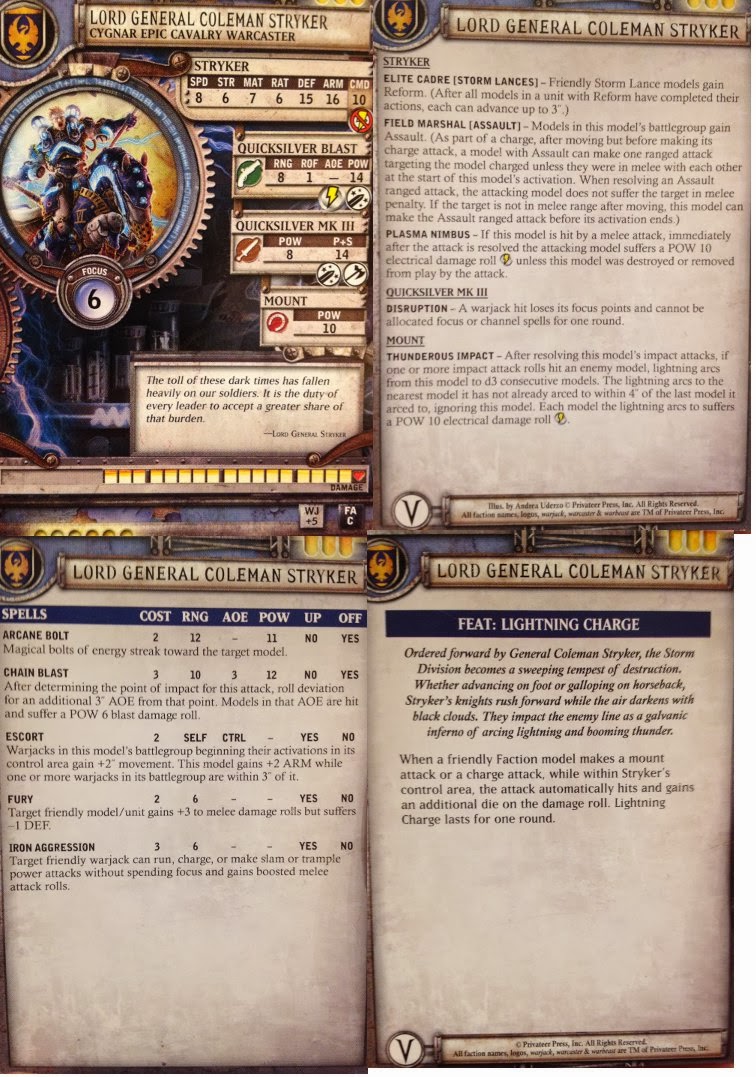 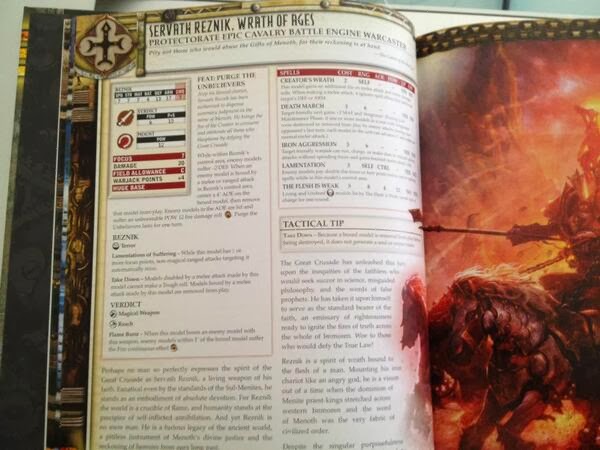 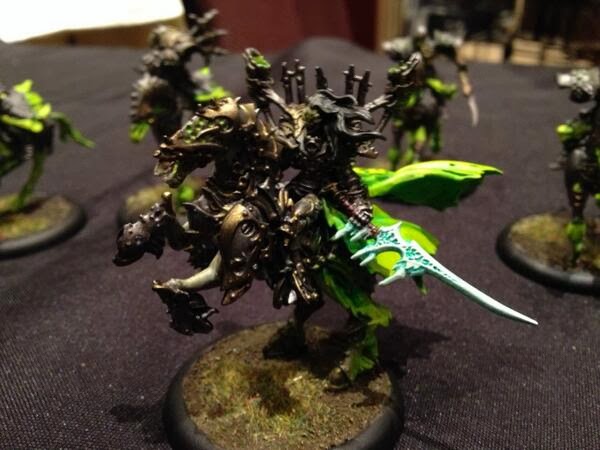 NEXT! The Scars of Caen League will be starting on March 8th I have lowered the fee to 5$ and extended the league by a week to April 12th for those of you who can't make it in every week.  I will LINK the Cards, as well as Rules for the league.  I hope you will join for you 5$ entry fee you will get a patch and a chance to win one of the emblems.  If we get at least 8 people there will be a surprise prize for the winner.

Exigence, the upcoming Hordes new release is looking awesome!  Farrow and Gators not only get new casters, but they each are getting a battle engine!  The Meat Grinder for farrow, and the Sacrificial Alter! Hordes gets some Jr. warlocks, with limited battlegroups but definitely a interesting addition. Also announced were warbeast units!  Small lessers that function as warbeasts but also as a unit.... Very interesting...  The Skorne one shown looked like wasps I am to be very interested!  :)  Legion didn't get left out they are seeing Abby go EPIC with Conferred Rage... really?  Her feat will be you Lose! :P I kid I kid! Along with a Large based Nephilim with two swords who is a character not only for Saryn but Rhyas as well.  Rhyas has reach just in case you didn't hear! :P I save the best for last..... EPIC Xerxis!  That's right oh by the way he's riding a Rhino! An EPIC RHINO! 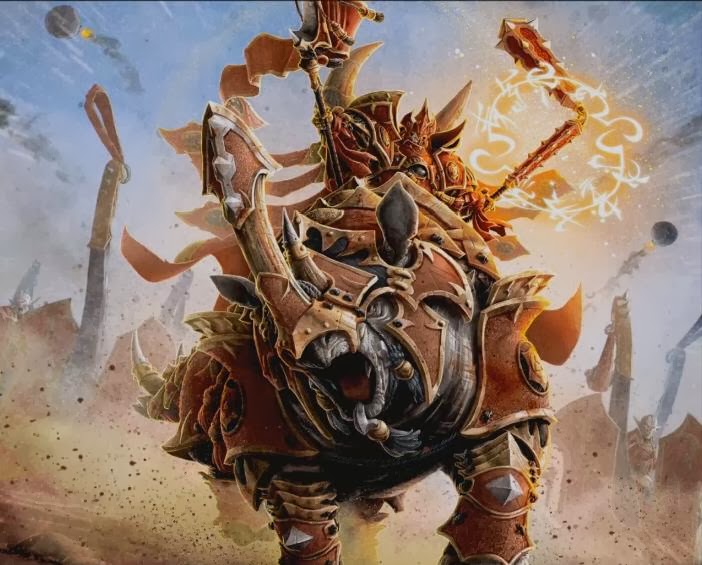 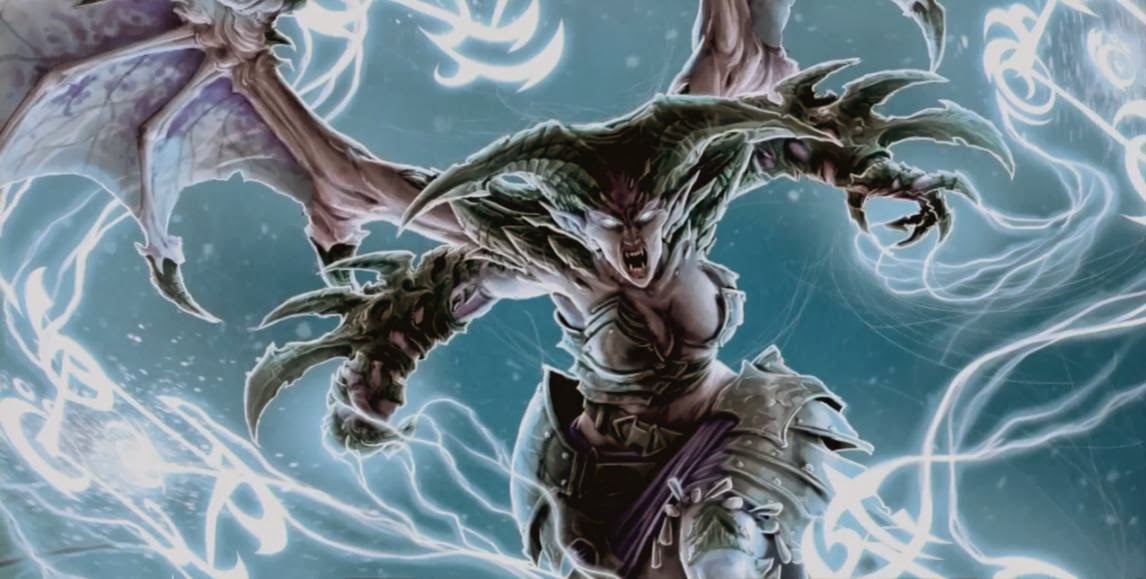 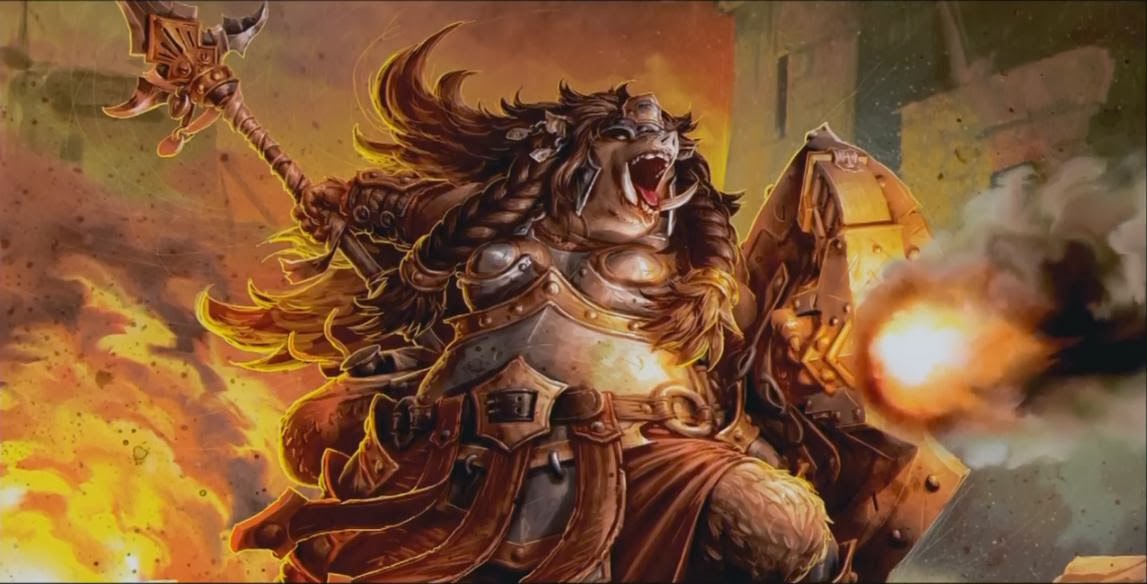 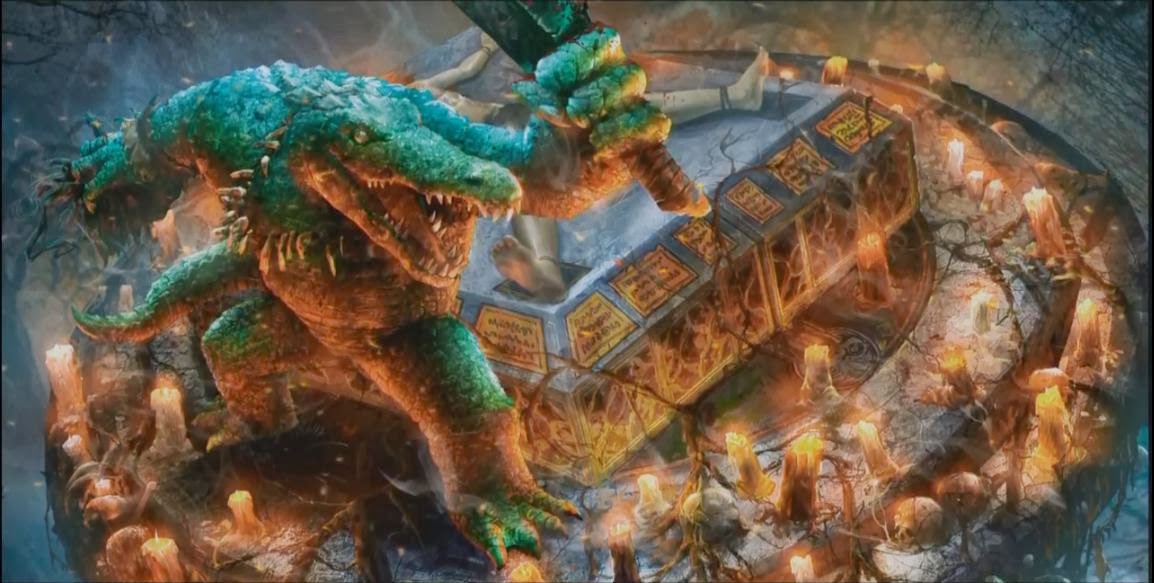 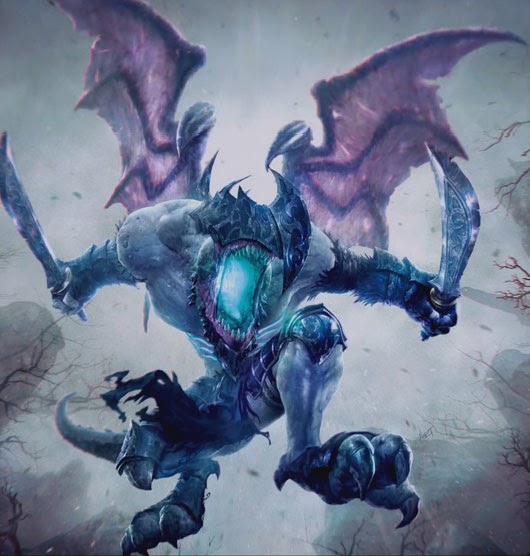 Lets not forget the BIG reveal Cephalyx!  Now going to be a mercenary pact like the Pirates and Rhuls. HOWEVER in place of warjacks the mighty warcaster's of Cephalyx will bring MONSTROSITIES!  Giant creatures created to bring havoc to the battlefield. From the video they will take units from mercenaries making them more powerful but if their overlord dies they flee...? or get weak...?  I am unclear but it sounds like fun.  Also from the sounds of it they have a lot of battlefield foolery :) Perfect now will they make drudges any better... 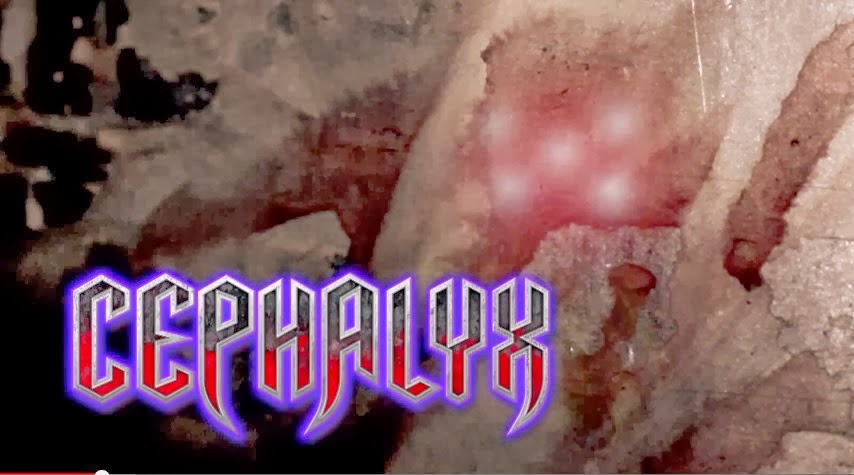 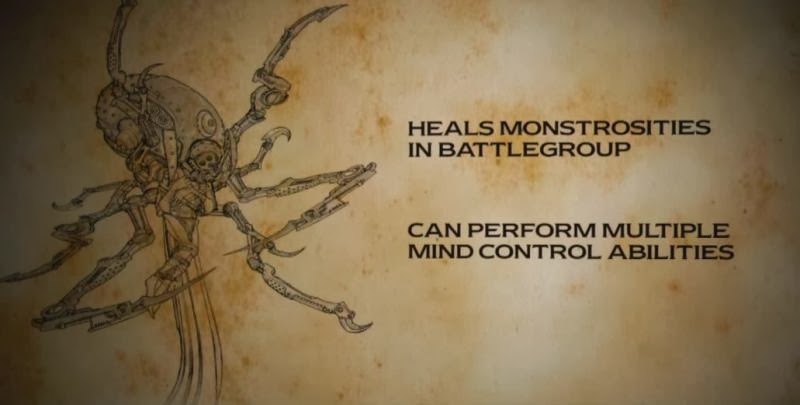 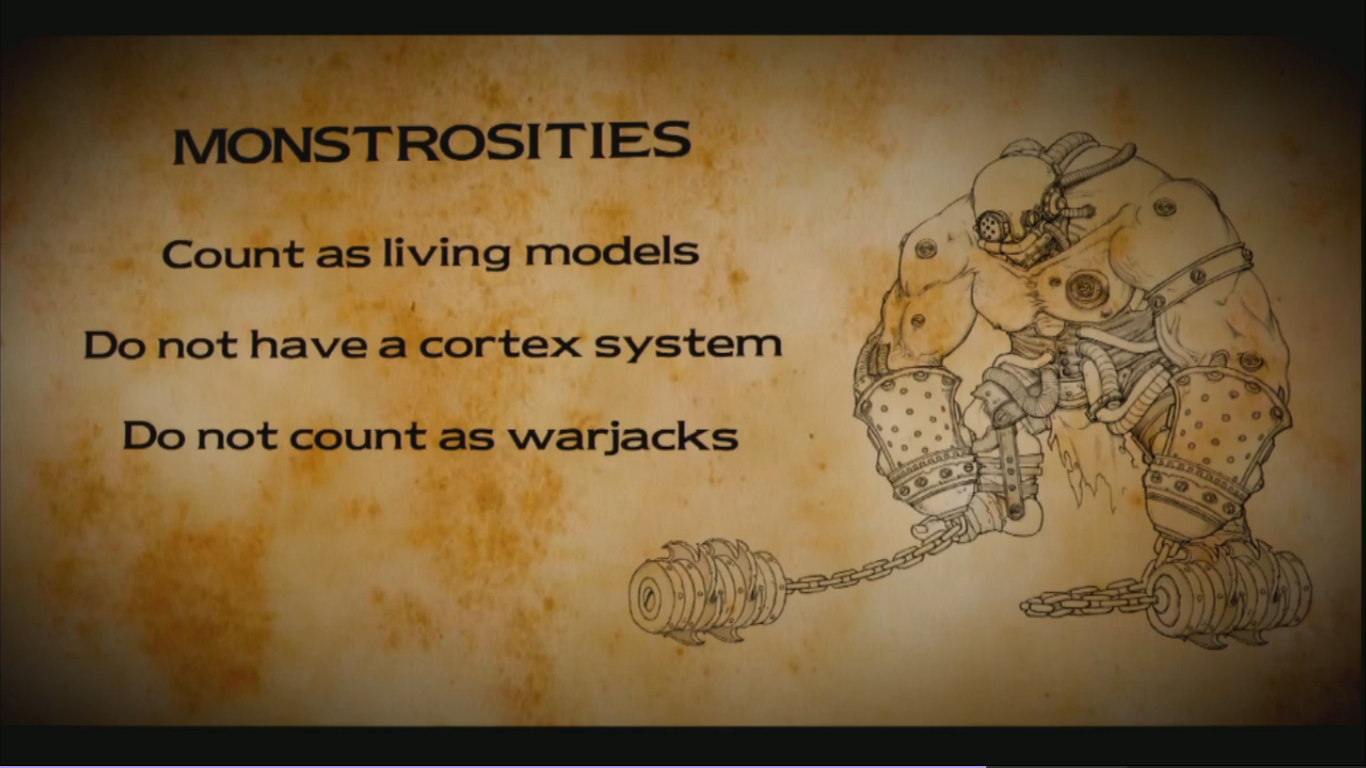 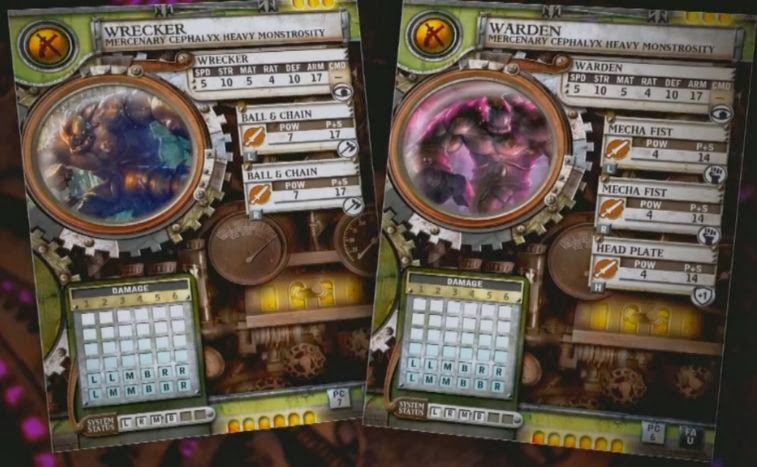 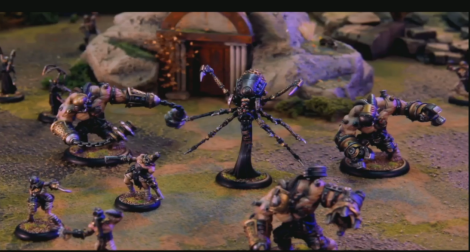 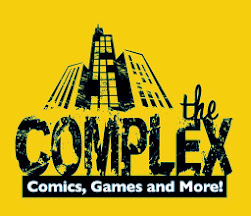 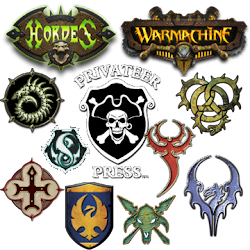